The Master’s Blog – July and August 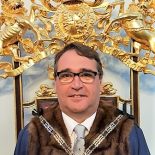 It’s been over 6 weeks now since my Installation as Master of the Company, took place, it was both a fantastic day and a great honour for me to be appointed in that role. As a Journeyman Freeman and The Master, I am particularly keen to keep all lines of communication open, especially to those who operate afloat.

With that in mind I would like to continue with the Masters blog, which was excellently delivered by our Immediate Past Master Dr Iain Reid for the past year. However, I make no promises, in being able to emulate his style of writing, which made his notes so engaging.

Late July and August is a quiet time in the City and Livery world, which has given me time, to prepare for the demands of my new role, which are rather different from my everyday job of running a passenger boat business on our River. Being referred to as Master takes a little getting used to, I don’t think it’s ever going to happen at home though. Joke!! An absolute privilege for the year, but I will always be just Tony.

Many of you will know of the public art project, Illuminated River, which will transform the capital at night with a unified light artwork connecting up to 15 bridges on the River Thames. Conceived by American light artist Leo Villareal and British Architects, Liftschutz Davidson Sandilands, the work has sensitively taken account of heritage, wildlife and of course, navigation on our River Thames.

On July 17th I was invited by the City of London Corporation and the Illuminated River Foundation to a reception to celebrate the launch of the first phase of the project which covers London, Cannon Street rail, Southwark, Blackfriars Bridges.

My wife Sue and I were then invited on 22nd July by the Sheriffs, Alderman Vincent Keaveny and Liz Green to a Tour of the Old Bailey followed by dinner. The tour of the Old Bailey, the country’s leading criminal court, was fascinating. Dinner was in the Grand Hall.

Next on 29th July was to cheer on our crew in the Company’s cutter, Jim Holt as it tried to regain the Thames Traditional Rowing Association’s Port of London Challenge. Under our Bargemaster, Robbie Coleman, the crew were Craft-Owning Freeman Dan Bartlett (present Captain of Poplar, Blackwall and District Rowing Club), J.P. O’Donnell, Journeyman Freeman and Doggett’s Winner Alfie Anderson and Harry Joynes. Apprentice Charlie Irwin was the passenger as the rules of cutter racing follow the traditions of watermen in having a passenger and a pennant. I had offered to be the passenger but our Bargemaster declined the offer with a reference to the overall weight of the vessel. I cannot think for a minute what he may have meant by this. No offence taken of course.

It was easier watching from the bar of the following boat, Salient than it was to row. As the following boat is also the finish line boat, as soon as the first race of women was away, we had to follow them up to the finish at Chelsea Harbour pier. As a result, we did not see the start of the men’s race off HMS Wellington. It must have been a difficult and potentially unsafe start as three cutters including ours were disqualified for failing to obey the Starter’s orders. At the finish the Jim Holt came second to the Water Conservators whose Bargemaster is Freeman and Doggett’s Winner John Dwan. With those disqualified removed the PLA coming home fourth were declared the winners.

The Company is affiliated to the Royal Navy’s Type 23 Frigate HMS Westminster. The Immediate Past Master invited the Commanding Officer, Commander Will Paston, to our Annual Dinner last year. He was unable to attend but was represented by his Operations Officer, Lieutenant Commander Simon Reeves. The Ship has just returned from NATO exercises in the Baltic and on her way back to UK waters was diverted to shadow a Chinese warship through the English Channel. The Ship’s arrival in the capital marks five years since she last visited her affiliated City of Westminster. Senior Warden Gina Blair and the Clerk represented me at a Reception and Capability Demonstration on 6th August at her berth at Thames Quay. I am told they had an enjoyable evening; I was very sorry not to be able to attend.

There being no more engagements until early September, Sue and I then left for a short break before the real work begins. A tough job, but someone has to do it.

All joking aside I’m really looking forward to the coming year and will be sharing all the highs and you never know some of the lows with you along the way.