Presentation of the Knollys Rose to the Lord Mayor

The Master of the Watermen’s Company as Escort to the Rose from the Parish of All Hallows Berkyngchirche, progresses to Mansion House to pay rent in discharge of the award which Lord Mayor Sir William Walworth imposed on Sir Robert Knollys in 1381, some 640 years ago. 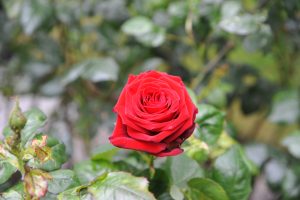 Prior to the event which gives rise to our presence here today, Sir Robert Knollys had ably led the English forces in Picardy during our Hundred Years’ War with France. He held at the same time the office of Captain of the City Archers and the City Men-at-Arms. In this capacity he was responsible for the defense of the City and his “territorials” trained at target practice just beyond the City Wall in fields near the present Artillery Ground of the Honorable Artillery Company. 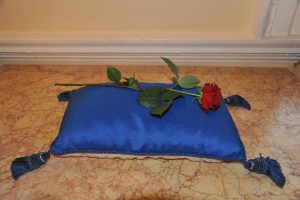 Thus, Sir Robert Knollys, together Sir William Walworth during the Peasants’ Revolt of 1381, had safely extricated King Richard II from the Tower of London. Unfortunately, the Lord Treasurer and the Archbishop of Canterbury (the second of four such Archbishops to come to a “sticky” end) were not so lucky as to be assisted and were murdered by the rebels.

King Richard II was barely fifteen at the time, yet Sir William Walworth let him pawn certain Crown jewels with the City Corporation and I have learnt that other Crown jewels were received as security by Sir Robert Knollys who lent the King £2,779.

Reverting to Sir Robert Knollys’ service abroad, in company with the King’s uncle John of Gaunt, presumably his Commanding Officer, he made many attacks in France that, according to the Oxford History of England, “yielded much plunder but gained no military advantage”. He did, however, “make the valley of the Loire tremble”.

Whilst Sir Robert was away at the Wars amassing a fortune, his formidable wife, Constance, acquired some property on the opposite side of the road to their house in Seething Lane. She did so with the intention of converting it into a garden where she could cultivate” a perfect English rose”. Once she had acquired the land, she built a footbridge, 14 feet high, over the road to connect it to her home. In the Norman French legal term used in those days, the footbridge was called a haut pas. It was certainly a faux pas, as it was contrary to the City’s regulations as “overbold” or, as we would say today, it constituted a “non-conforming user”.

It seems that Sir Robert came back from France to find Lady Knollys in real trouble with the City authorities who then dealt with the problem in a strangely modern way. Just as a friendly planning officer today might point out that the structure had been erected without authority but advise that the position should be regularized by the submission of a belated planning application, it appears that a more than friendly Lord Mayor said much the same thing to his old friend and added, I suspect, “I’ll see you’re alright!”

2And so it proved, the Lord Mayor’s Court ruled as follows: “. . the said Messier Robert and Custance, his wife, shall have and hold the haut pas, they and their heirs and assigns forever, they rendering yearly unto the Chamberlain of the Guildhall of the said City, for the time being, on behalf of the said Commonalty, one red rose at the Feast of St John the Baptist, called the Nativity.

So once a year the Master and the Clerk go to the Rose Garden in Seething Lane that is now under the kindly care of the City Corporation. Incidentally – it must be rare in legal history for those entitled to a penalty actually to produce it themselves! The Master plucked a red rose, which it is presented to the Lord Mayor in payment of the penalty imposed in 1381 in the 5th year of the Reign of our late Sovereign, King Richard the Second.