Some years ago, I was invited to watch the Thames Barge Driving Trust’s barge race, being an up-river man, this was something completely new to me. I was fascinated by the spectacle.
The PLA won the first race I watched, and I was soon informed because of the competitiveness of their barge and crew, this was usually the case.
On my way up to being Master of the Company I wanted an objective for my year and thought it would be a wonderful idea for the Company to own its own barge to enter races and use to train apprentices in the age-old tradition of barge driving. The problem would be raising the money and getting someone to build the barge at a reasonable cost.
At my first Quarterly Court I put my proposals forward, they were well received and at the Quarterly Court lunch I announced the project. To my huge surprise, by the end of the lunch we had raised a very substantial amount of money, thanks to the generosity of the Court members and Freemen. I was soon to meet with Bill Robinson who had always wanted to build a barge for the Company and he quoted us a very good price for the build.
By this time, we had accumulated enough money to place the order. During my time as Master I visited South Docks with the Clerk on many occasions. It was rewarding to see the progress of the build and the first-class workmanship achieved by Bill and his team. The target date for completion was set for the beginning of July in time to enter the barge race. 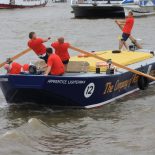 Our rowing officer Simon McCarthy put together a first-class crew. As you can imagine on the day of the race tensions were running high and I will never forget being moored upriver of Westminster Bridge watching the Apprentice Lighterman way out in front romping home to win, this must have been one of the proudest moments of my life.
My thanks go out to all those who made it possible  Bill Robinson and his team, our sponsors and the crew on the day.
Past Master John Salter