The annual Knollys Rose ceremony was held on Monday 17 June where the rose was presented to the Lord Mayor on an alter cushion carried by the Verger of All Hallows-by-the-Tower, accompanied by the Vicar and the Churchwardens 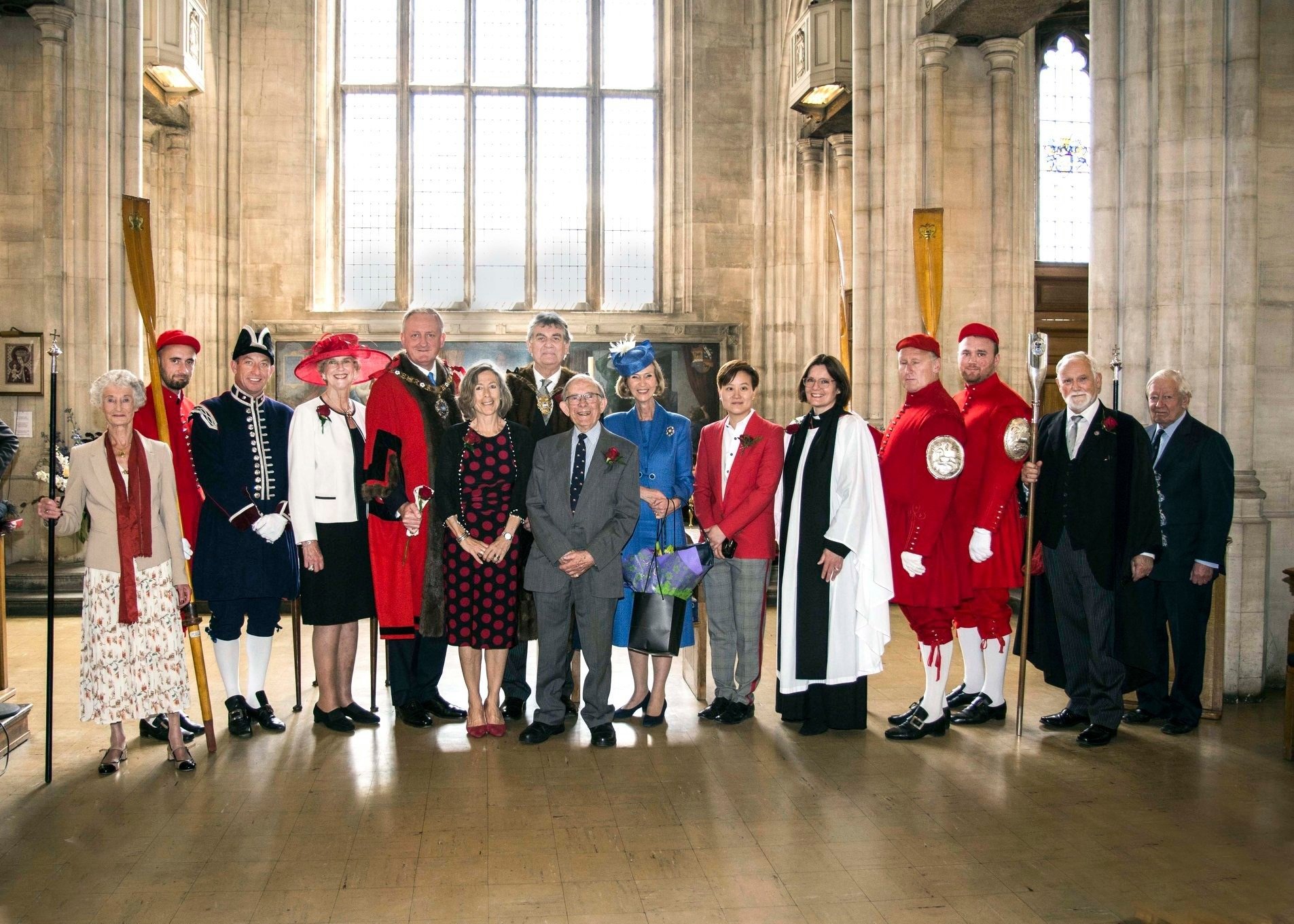 The Ceremony took place this year at All Hallows by the Tower, due to the Mansion House suffering a small fire. The chief Escort to the Rose – the Master of the Company of Watermen and Lightermen or another leading Citizen of London or distinguished person – presented a red Rose to the Lord Mayor. The Rose is picked from the Corporation’s garden in Seething Lane now on the site of the property acquired by Sir Robert and Lady Knollys. The garden was once owned by the Port of London Authority who the Company has close connections.

The Rose is presented to the Lord Mayor on an alter cushion carried by the Verger of All Hallows-by-the-tower, and is accompanied by the Vicar and the Churchwardens.

The traditional ceremony of cutting of a rose by the Master takes place in Seething Lane Gardens. The cutting ceremony takes place at approximately 11:00. This is followed by the procession to the Mansion House, this year all processed to All Hallows by the Tower,  and the ceremony to present the rose to the Lord Mayor and Lady Mayoress.

The Knollys Rose Ceremony commemorates an Ancient City custom dating from 1381. For over 600 years a red rose has been presented to the Corporation of the City of London as the payment imposed in that year on Sir Robert Knollys and his ‘ heirs and assigns, for ever’, for leave to build a footbridge across Seething Lane. The footbridge has long since disappeared and Sir Robert’s heirs and assigns are probably unidentifiable. The legal requirement for the payment however has grown into the present ceremony which was revived and invigorated between the wars by the late Reverend P. B. (Tubby) Clayton, CH, MC, DD, Vicar of All Hallows-by-the-Tower and Founder Padre of TOC H. At the Padre’s invitation the Ceremony has been arranged by the Company of Watermen and Lightermen of the River Thames since 1960.

Sir Robert Knollys’ origins are unclear and although some historians consider that he was born of humble parentage in Cheshire, he is said to have been related to Sir Hugh Calvery, another great military leader from Cheshire. He came to prominence in 1346 and established himself as a mercenary leader operating mainly in Brittany – Sir Arthur Bryant described him as one of the most famous captains of the age and, through ransom and plunder, one of the richest. In 1352 the French army invaded Brittany and recaptured Rennes. The English army intercepted them at Mauron, and under Sir Robert Knollys completed the enemy’s rout. The victory at Mauron left the English Masters of Brittany.

After the Battle of Poitiers in 1356 he remained with his followers in France and took control of a large area south of Paris including 40 castles. The charred gables which marked the progress of Knollys’ army were known as ‘Knollys mitres’. He accompanied the Black Prince to Spain in1367 and led an English army through Northern France in 1370 after war had broken out again with France. In 1380 he took another army into France and won a great victory over the French at the Siege of Nantes.

His wife Constance, or Constantia, was as belligerent, and in 1360 had sailed to support Sir Robert in Brittany with twenty men in arms, fourteen mounted archers and three ships.

By 1381 Sir Robert was a prominent citizen of London and, with Mayor Walworth, assisted King Richard II in putting down the Peasant’s Revolt led by Wat Tyler, whom Walworth Slew. For his services he was granted the manor of St. Pancras. 1381 was a significant year in Sir Robert’s life since he appears to have retired from military service and invested the fortune he had massed through loot and ransoms in property.

Among his other properties Sir Robert owned a house on the West side of ’Syendenlane in the Parish of All Hallows Berkying-chirche’ – now Seething Lane. During one of his absences, possibly in 1380, his wife Constance is reputed to have purchased a piece of land on the East side of Seething Lane – where the present day garden is sited – and built a footbridge over the lane from their house to her garden on the other side. That this was done without the equivalent of planning consent is evident by the Corporation imposing a fine of one red rose payable each year on the feast of St. John the Baptist (24th June). For this payment was given ‘to make a hautpas, of the height of 14 feet’ across the road. The fact that the actions of Sir Robert, or his wife, possibly constituted a serious offence was probably mitigated by his position as a leading citizen and successful soldier. The Rose payment was no more than a peppercorn rent, a symbolic fine on a man to whom the City owed so much.

Despite his ruthless pursuit of military conquest and fortune, Sir Robert made many benefactions, maybe to salve his conscience. He was among the founders, with Sir Hugh Calvery, of the English Hospital in Rome. He funded the building of Rochester Bridge and the chapel nearby as well as the Norfolk churches of Harpley and Sculthorpe (where he died in 1407). Sir Robert was also a Benefactor to the London Charterhouse (Carthusian Priory).

In 1375 he founded a hospital in Pontefract, Yorkshire. There may have been a personal connection here as his wife is thought to have been a member of the Yorkshire family called Beverley.  In 1377 he created a trust fund in favour of the hospital of all his Norfolk property and in 1407 settled some of his London property on the hospital.

What was doubtless a legal formality has now become a most interesting ceremony and one of the City’s traditions. The Company of Watermen ad Lightermen, which organises the annual payment of the Rose, is based at its Hall in St Mary-at-Hill. This was built in 1780 and is the only remaining Georgian Hall in the City. Coincidentally, Sir Robert Knollys acquired in 1402 thirty-four shops and other property in the Parish of St Mary-at-Hill which he settled on the Pontefract hospital.