History of the Wager 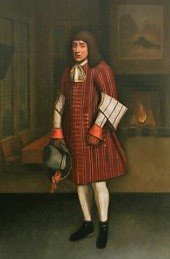 In 1715 Thomas Doggett founded the Coat and Badge Wager to commemorate the accession of George I to the throne . Doggett was born in Dublin c. 1640, and moved to London in c. 1690 to pursue a career in acting. He made his first stage appearance in London in 1691 as Nincompoop in Thomas D’Urfey’s Love for Money. In this part, and as Solon in the same author’s Marriage-Hater Matched, he became popular. He was associated with Colley Cibber and Robert Wilks in the management of the Theatre Royal, Haymarket, and Drury Lane, and it was while he was managing Drury Lane that he founded the race.

There are two legends explaining Thomas Doggett’s support to the watermen. The first is that while returning home from the theatre one night he fell into the river and was rescued by a waterman. The second suggests that while trying to return home the conditions were so bad that most watermen turned him away, until one young, newly appointed waterman agreed to row him across the Thames, and did so safely. Whether either of these are true or not, we do know Thomas Doggett’s enthusiasm was so strong that he organised the race himself until his death in 1721, and his will ensured the survival of the race.

Thomas Doggett’s will instructed his executors to endow the race, which was to be managed by a Mr Edward Burt of the Admiralty Office. It set out detailed particulars of the style and cost of the badge and livery, and specified that the race was to be held annually on 1st August “for ever”. Mr Burt being apparently unwilling to assume the burden laid upon him by the will, it was arranged that the executors should transfer £300 to the Fishmongers’ Company, which would carry out Doggett’s instructions instead.

A likeness of Thomas Doggett  by the artist  Ying Yang is on display in the Court Room at Watermen’s Hall .
This is a copy of the original painting by Thomas Murray which is at Sherborne Castle in Dorset.